Cliff Glover makes pots outside of Mendocino, in the Redwood forest of Albion. His studio feels like an 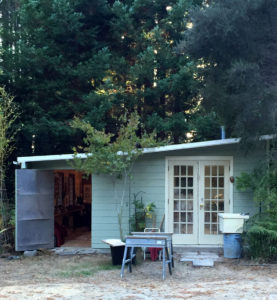 idyllic place, an oasis in the woods where the pots seem to emerge from the dense brush and forest pine. He fires a reduction kiln, working with porcelain and stoneware in pursuit of Shino glazes, as well as producing the subtle and quietly beautiful tea ware for which he is known.

Adjacent to his house, the studio itself is a long rectangular out-building repurposed into a pottery. Windows face a grove of Redwoods, as well as the kiln pad which acts like an outside studio for glazing. He uses a stand-up wheel, a wedging table, a tall work table and racks on wheels for his production work. Outside the studio-door sits a make-shift sink attached to a garden hose. 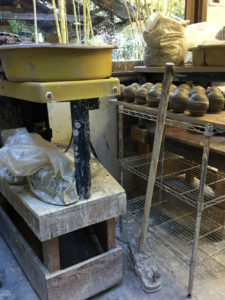 Cliff stands on rubber restaurant mats which are a good idea if you work on cement. Interestingly, he talked about practicing mindfulness as he stood centering clay, focusing on his feet touching the ground, connecting himself with the material and its source. An ingenious “gear clutch” on his pedal for throwing was something I’d never seen before, and made me once again appreciate the spirit of invention that every artist brings to his/her own studio process.

Working and making pots in your own studio in the middle of nature sounds ideal, but there are challenges with materials and accessing resources, as well as delivering work. He relies on making small pieces for wholesale, as well as larger pieces for galleries. Cliff talked about an “openness” inside his studio, the flowing from the interior to the kiln pad, through windows and beyond the forest – a momentum which impacts his work. “I don’t feel lim 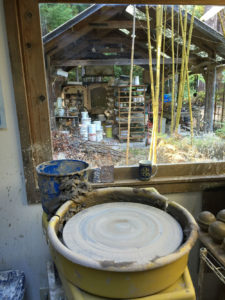 ited,” he said speaking of his environment. “I don’t feel confined”.

Cliff belongs to a tribe of potters who make Cone 10 reduction-fired work. He’s been making pots for over twenty years, and if Armageddon arrives, Cliff will invent some way to bring his kiln with him.  “It’s more important than a wheel,” he said.

He fires an updraft Olsen using propane. The glazing, the loading, the firing of his work in this kiln has developed into the most intense aspect of Cliff’s process: his investigation into Shino glazes and their peculiarities in application and firing – all of which where the kiln is the centerpiece and the culmination of the work. 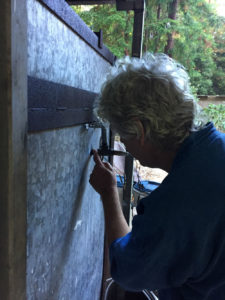 Cliff is a great cook, and he believes clay is a “natural” for food and bringing the greater community together. In a sense, his pots are proxies for wider ambitions and a deeper philosophy that comes from being so close to nature. Whatever Cliff attempts, he goes about it with a journalistic fact-finding seriousness (in a previous career, Cliff worked as a reporter and editor), but he also brings joy. “Whenever I have something that I might not want to do, I figure out a way to make it fun for me. I really can’t get motivated unless there’s an element of fun.”