Scott Jennings makes porcelain tableware fired to Cone 6. He works out of Red Brick Studios in the Mission District of San 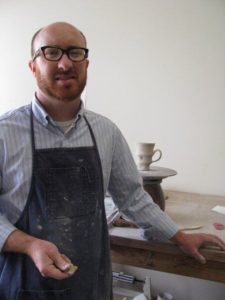 Francisco, an artistic home to twenty-seven other ceramic artists. Red Brick has an open floor plan, no walls, divided into spaces of 100 square feet, many of them shared between artists. I’ve worked across the room from Scott for a couple of years now and learned a lot just from watching him pinch and slab-build his cups and bowls. I thought it might be interesting to talk to him about making pots and how he keeps his sanity inside a communal studio.

Scott rents a space for himself. He works at a long table raised high on cinder blocks. A wooden door and several different sizes of drywall sit on top of his work table. The placement of everything inside Scott’s studio space feels purposeful and efficient, from the height of his table to the wattage in the light bulbs. Even the way his work table is organized looks composed and organized.  Most of all was the feeling of calm standing in the middle of his work space. Everything felt at rest and under control, as if a person could really get some work done here.

The front third has shelves to display his work for Open Studios and to hold as inventory for galleries. In the rear stand tall racks for work in progress, tools, and other supplies. Scott builds with paper-thin slabs, and he makes his own glazes. He keeps raw ingredients underneath his table. He’s incredibly efficient with his clay and works close to having almost zero recycling. His space is situated in the middle of the studio with neighbors on either side of him. 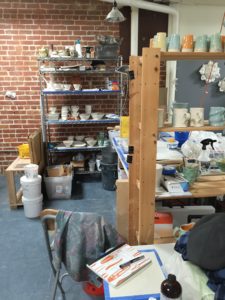 Scott stands at his table and works on a banding wheel he’s had from his days at Cal State Fullerton. Over the years, I’ve noticed his banding wheel sitting on top of a flower pot and wondered what it was all about. I was interested to learn that the pot is used formally as a pedestal, but at one time housed an orchid from Home Depot that eventually died.  Luckily, the empty flower pot turned upside down was the exact size to raise his banding wheel a foot higher, so he could have a “low” wheel and a “high” wheel.

Working inside a small space and inside a community vying for kilns creates its own challenges. I asked Scott if he felt limited and he said he didn’t feel that way at all.  “I like working side the constraints of a material and working creatively within those limitations.” He was referring to his work process of using slabs and investigating particular forms, but we agreed it also applied to working inside a space with limitations like Red Brick. Narrow opportunities and crowded spaces call for creative thinking and problem solving.

Scott likes the atmosphere of working alongside other artists, the camaraderie and the visual stimulation. A fresh rhythm 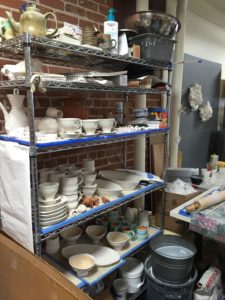 enters the studio-mix every time a new person joins, so there’s lots of stimulus. Scott has worked in mostly small spaces over his career, so he’s comfortable where he is. “I might not know what to do with a lot of space. It might feel weird to have a whole room to myself.”

When he first started out many years ago, he had an order to make 150 cups for a wedding – his own to his wife, Erica. The problem was he had no studio to make the cups, so he used his kitchen table and began to make the work that has become his signature style –  paper-thin slabs glazed with light celadon colors. He made the cups for his wedding party, and then orders started coming in. Interesting to note that working within a small space is actually one of the inspirations that turned his style of functional pottery in a different direction.

Although he liked spending time at home with his pots when he was working on his kitchen table and later in a shed in his backyard, he doesn’t mind having the studio space detached from his home, a long bike ride away from the Mission.  “It’s better to keep it separate,” he said. “There are distractions everywhere, but here in the studio I can focus, do the work, then leave.”

He’s currently focusing on “working slowly” and not making as much as he used to make. He teaches ceramics around the Bay Area and has his work in local galleries. He seems to have found an equilibrium balancing his work, his teaching, and his family life. When I asked him the secret to keeping his space so organized and efficient, he said “Purge often.”

Hypothetical: Armageddon time. Climate change. Waters are rising. Time to escape to higher ground. You can bring one tool with you, which one would it be?

“Can I bring my hands?” he asked. The perfect answer. That’s just Scott: always detailed, always thoughtful, and keeping it real. 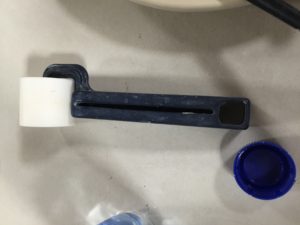 Vince Montague is a writer and a potter. He keeps a blog about pottery, writing, and walking at vincemontague.com