What is your medium, and what inspired you to start working in glass?
Medium is glass, and in this century, mostly recycled glass. As a child I said I wanted to be a “poet, author, artist, scientist”. By the time I was in college (1950s), I knew I wanted to work in stained glass. I thought I would bring stained glass into the 20th century, not realizing there were others already accomplishing this. What attracted me to stained glass were the pure color, the black lead-lines, and the crazy frontal bodies and faces of medieval stained glass (and mosaics) that I saw in books.

When and where did you start?
My parents were very encouraging. They bought me some glass and lead while I was in college and I got a very early “how to” book. But it was too hard to teach myself. In 1959 I became an apprentice at Myers and Escuder Stained Glass Studio in Tampa Florida.

Where is your studio and what does it look like?
My studio is in the garage of our house. When we remodeled in 1988 and enlarged the garage, my husband thought he would have some space to store stuff. But I took it over, and a car hasn’t been in it since. I use the garage door opener to lift the top of my kiln, which I adapted from plans I bought.

Who were your early influences?
After learning the techniques of stained glass from Joe Myers and Joe Escuder, I more or less was on my own technically. I studied art at Yale for three terms and took several classes there with Josef Albers. Albers’ ideas on color were very influential on my work, and still are. It took many years before I developed what I called my own style. 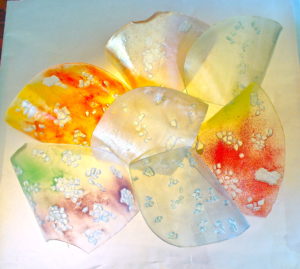 Who helped you along your path the most?
Mostly it was the good will of friends and acquaintances and people who read about me. People were so interested in what I did. My studio formally opened in 1967 in Washington, DC. Because it was so unusual for a woman to be doing stained glass, I got a lot of press – even before I really was doing good work. For instance, I was featured in a House Beautiful article on new work in stained glass in 1973. I was one of four artists profiled, and it was a real boost. It gave me credibility, even though I had not yet reached my own style.

How has the field changed since you started?
Wow! Lots. One major change has been the dropoff of interest in stained glass and the rise of blown glass (hot), and “warm glass”, which is glass formed in a kiln rather than a glory hole. My own work shifted in the mid-1980s from stained glass to three-dimensional glass, mostly kiln-formed, but also constructed with plate glass and light.

Do you make a living at making your work? What do you do to support your work?
I only rarely made a living from my glass work. Only when I got large commissions – mostly in the 1980s and early 2000s. My work was subsidized by my career as an urban planner, later morphed into an environmental planner. My formal planning career ended in 1998 after the firm I worked for was closed down by its parent in Chicago. 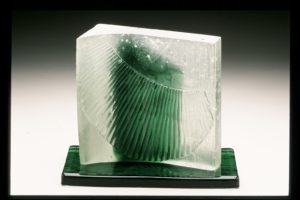 What are your favorite pieces to make?
There is a distinction between the pleasure of making and the pleasure of outcome. Sometimes the two are in sync, other times what I think will be amazing turns out to be ordinary, or even dull. I think my favorite pieces to make have been my Landscape Series of the late 90s and early 2000s. They came straight from my soul, but only one of them sold. I think they were 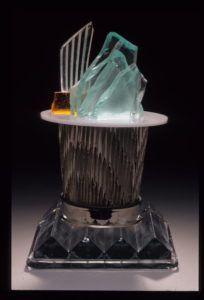 too bulky to move or ship.

What was an early failure that discouraged you? How did you overcome it?
There were so many failures. I sent so many proposals (for large scale works) and got so many rejections. Some of my best work is unbuilt. I had to realize that in any venture, whether it was a mass mailing or proposals for competitions, a favorable response rate of 5 percent was good!

What are you working on now that is the most inspiring to you?
Because I am near the end of my glass career, I am doing more writing. I am, however, working on images for a self-styled Memoir – photographic images on glass – reflecting people and places important to me.

How do you stay motivated?
The arc of my work shows my exploration of “what if”. I am always asking this and my work changes as a result. Sometimes the changes are from opportunities that present themselves. I am not interested in doing repeats.

What is the most difficult  thing about your work?
Sometimes it’s the physicality. For instance, in order to do my molds for casting, I was covered in plaster powder for days. Each piece was a one-off, as I had to destroy the mold to get the glass out. I finally abandoned one-off molds because I was spending more time in plaster than in working with glass.

What is the most rewarding thing about your work?
A few years ago I made a small slide show of my best work as part of an open house/studio my husband and I did. When I showed that disk to a friend last summer, I ended up thinking, “Well, by God, I’ve done some good work!” One tends to get lost in the trees when working on projects. Having that chance to see my own work ass part of a whole, even on a computer screen, was very rewarding. 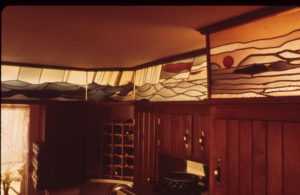 What has been a high point in your career?
Well, this century has been very good to me.  In 2002 one of my Landscapes was bought by Merck &  Co. for their corporate headquarters in Rahway, NJ. In 2004 a piece of mine got into “Blown Away”, an internet exhibition juried by Josh Simpson. In 2006 I got a cash award from CalEPA for innovative use of recycled glass.  In 2007 I got a Career Grant from the Marin Artists Council to upgrade my kiln wiring so I could fire glass in 3-D molds.  Also in 2007 I was a finalist for the Raphael Prize in Glass, a nationally juried prize granted by the Society for Contemporary Craft in Pittsburgh, PA.  In 2008,  I completed a complex multi-layer room divider with internal lighting.  2009, a set of my tiles was juried into “Family Album” a show at Woman Made Gallery in Chicago.  2012 I was an exhibitor and Presenter in “50 Years of Studio Glass” at The Crucible in Oakland.  Last year (2015) I completed a 26-piece wall installation at Public Glass in San Francisco. The things that are significant to me about these is that many of them were “out of region” and also, I was excited that I could keep going in a demanding field into my late 70’s.

What do most people not understand or know about your work?
The number of failures, or “no goods”, that accompany any piece I’m really proud of. The fact that I’m not just sitting around thinking beautiful thoughts. This is demanding work.

What is the most common question people ask you, and what do you tell them?
Do you do work like that guy with the funny name (Dale Chihuly)? I tell them I don’t blow glass but I do, or have done, practically every other technique in glass. I even tried lamp work (using a bench-mounted torch to make beads etc.).

What do you like to do when you are not in the studio?
For 16 years, I was a competitive rower (as in crew). I started at 59, and was in my last race (Head of the Charles in Boston, single scull) at 75. Rowing is an all-consuming sport and requires constant upgrade of your abilities. Nerve damage in my arm, resulting from 1999 radiation – and possibly exacerbated by rowing – caused me to stop in 2012. I mourned the end of my brief rowing career. Now I read, cook, swim, write and spend time talking with my husband, or just staring at the trees outside.

How do you manage the work/life juggle?
Indeed, it has been a struggle. For a while I was juggling children, my urban planning work, a studio and a marriage. Luckily, my husband has survived my craziness and remains one of my best critics.

Best piece of advice you’ve ever gotten from someone in or out of your field?
From my first glass teacher, Joe Myers. He used to say, “You’re knitting. Don’t knit.” By this he meant, don’t over think your work. When faced with a large complex project I usually tried to figure out each detail of the work in advance. But sometimes that is not possible, at least in art, and you have to stop knitting. You have to let each stage lead to the next. The end product may be somewhat different from the original image. 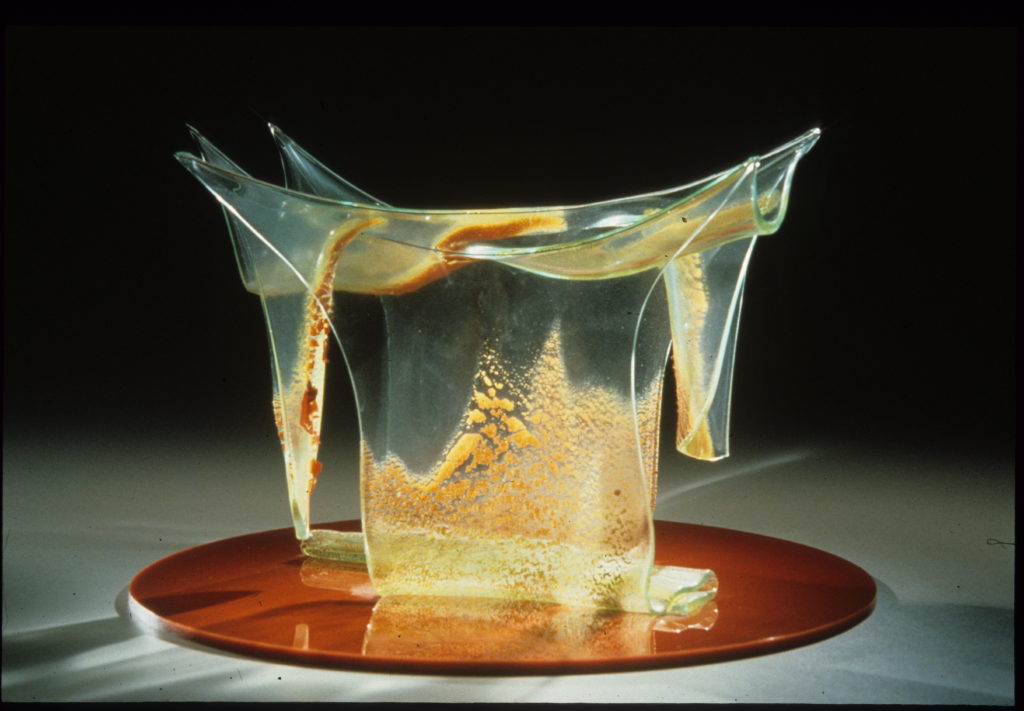