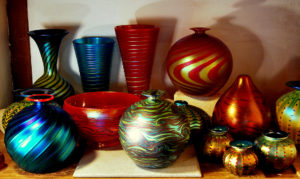 A shelf in the studio.

What are you considering when you are making your work?

My work is so obviously about the material; and the design and execution of functional vessels, but I’m constantly aware that we’re creating future artifacts.

The vessel is a compelling human archetype: an abstraction made reality, via the molten glass.

My recent vessels have evolved from one perfect, functional, ancient Roman vase in a museum in Padova, Italy.  I trust my intuitive sense of form and color, then add silver and metallic oxides at extremely high temperatures to attain the ephemeral iridescent luster of ancient glass.  I hope to invoke a sense of the archaeological, while creating decorative vessels of universal appeal- objects that manifest both the personality that formed them, and the amazing inherent properties of the molten glass. 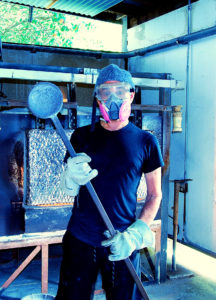 Peter Vizzusi in the studio.

How do you keep your glass business going?

The proximity to San Jose State University, the perfect glass blowing climate, beautiful geographical location, and burgeoning art community lured us, and many of our colleagues to the Bay Area. But, ultimately, its a difficult business, and there’s been a natural attrition.

If I have thrived here, for a few decades now, its through perseverance and productivity. I’ve never sought any kind of stardom, working almost anonymously behind the Magic Sands logo, but I’ve attained a certain small cult notoriety which has enabled me to master certain aspects of my craft without many distractions.

By focusing on the functional and decorative, we’ve never had to stand there, hat (and resume) in hand, waiting for the approval of academicians or “curators” but rather, we’ve taken our work directly to the marketplace.

It’s almost atavistic to work as an artisan in the 21st. Century.  As a contemporary artisan, I work in a weird space between the old and new world. I respect the skill and traditions of the historical masters, but I’m completely free to explore the improvisational possibilities of the molten glass. 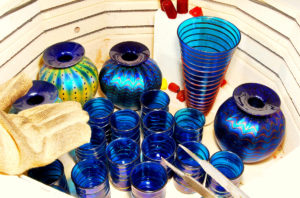 What is your process?

My process is essentially the same as that utilized in ancient glass-making; but also relates to the best of Murano, and to Tiffany’s “Favrile” from the turn of the 20th Century. The recent “studio glass” movement has taken glass-making out of the factory and returned it to the smaller, artisan-operated studio.

The climate in the 60’s at the beginning of Studio Glass Movement came from a void, with no continuous tradition of glass blowing in America, possibly because America had gotten so good at the mass production of glass, ceramics, and everything else. We were able to make it up as we went along.  There was certainly no “right” way to do it, so the field was wide open.

By re-visiting the past, we’ve found a new direction. As a modern artisan, I inhabit the shifting space between the old and new world. While I respect the skill and traditions of the historical masters, I’m free to explore the improvisational possibilities of the molten glass.

My best work is done when I’m seeing the glass, through my own eyes, and the choreography of production becomes nearly unconscious.  Then, I’m able to coax the glass into shape, improvise forms, and add color, texture and iridescence- the possibilities of which are already contained in the molten material. 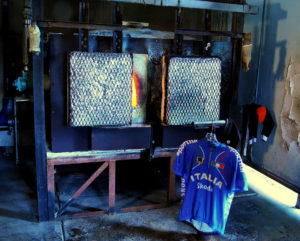 Please talk about what you are working on now and share some of your inspirations.

We often hear questions on “inspiration” and creativity.  But don’t you agree that inspiration is the luxury of amateurs; that you just have to GET TO WORK?

I find it’s better if I don’t follow contemporary glass closely, but rather ancient or historical work.  My recent vessels have evolved from one perfect, functional, ancient Roman vase that I saw in a museum in Padova, Italy.  I have to trust my intuitive sense of form, then, I’m able to coax the glass into shape (often improvising), and layer colors, textures, and iridescence- the possibilities of which are already contained in the molten material.

Some of my work may evoke a sense of the archaeological and, hopefully, manifest some of my personality and the amazing inherent properties of the molten glass. 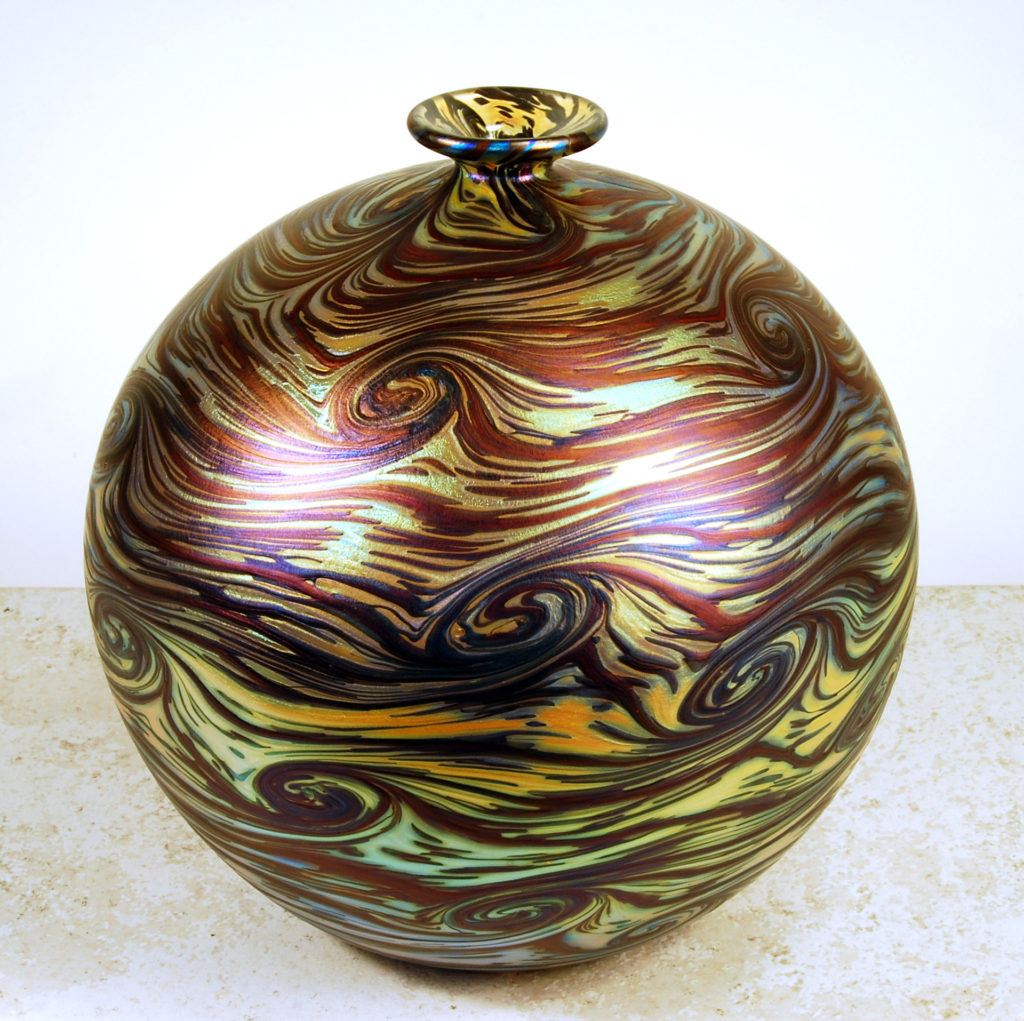 Any last words?
I’m fashioning functional contemporary vessels, and, owing to the inherent durability of the material, leaving FUTURE artifacts. So let’s talk again in 500 years when my work has taken on an even more interesting patina, and we’ll see what the scholars, critics and curators have to say.