Davis Arts Center has been hosting an ACGA show during the CCACA Conference since 2006.

The participants, all members of the ACGA and were selected for this show by juror Mary Law (see below).

Although we were  disappointed not to have the show live, we are delighted to be able to share a sample of the work and information about the individual artists here on the ACGA website.

The Davis Arts Center is a special venue for ACGA Clay artists, as they have hosted this show since 2006 in connection with he California Conference for the Advancement of Ceramic Art.

Time is a never-ending force, indifferent and inevitable. As it passes, we are left with only the memories of what once was, and the subtle signs of what is soon to change. As days, weeks, months and years make their march forward, the natural world around us changes with evidence of decomposition and degradation. Every scar acts as a manifestation of this inevitable evolutionary process, becoming beautiful in its own right. These signs of change surround us. Life and death will pass and we are left feeling vulnerable. It is this tenuous ephemeral existence that I explore, and how the knowledge or lack thereof impacts the world and lives around us.

A love for nature was instilled in me at a very young age. I saw for myself how the intersection between humans and the natural world could have great consequences. By using the human figure and textures inspired by the world around me, I explore our fragile nuanced web of interconnectedness. I use subtle markings to evoke this sense of fragility and a long rich history of life. My figures depict a variety of ages, sexes and ethnicities representing the vastness and richness of humanity. We are all unique and we are all the same. One decision can impact all of us for better or for worse.

To learn more or inquire about artwork, please visit https://www.christopherfortin.com/

My work explores simple utilitarian forms designed to be used every day. I am inspired by traditional Japanese and Korean folk pottery. My surfaces and decorative aspects rift on marring eastern and western aesthetics while pushing the forms and surfaces into a contemporary ceramic context.

To learn more or inquire about artwork, please visit https://www.ianbassett.com/

I have always enjoyed making things with my hands and fell in love with clay in high school.  Consequently, I took a gap year and rode the train, from NY to Nevada to study for a semester at the Tuscarora Pottery School.

After college I worked in carpentry and then attended graduate school in Architecture at University of California, Berkeley.  While practicing in the field of architecture for several years I was yearning to get my hands into clay again.  I started taking ceramics classes at local community colleges.

I set up my own small studio in 2005 and moved to my current spacious location in 2013.  My work is mostly wheel-thrown, sometimes altered.

When I use a handmade object, whether of clay, wood, fabric – whatever the medium – I relish the signs of the makers touch.  I notice proportion, texture and color and the myriad small decisions the craftsman has made about form and function.   Handling, serving, eating from, and even washing hand-made dishes is an antidote to the virtual world.  I hope that my pots provide a pleasing visual and tactile experience.

To learn more or inquire about artwork, please visit http://www.margaretnormanpottery.com/

My Water Drop Series emerged as a metaphor for life and the environment. It represents our physical and spiritual dependence on water. Triskelion and Fate depict triple spiral labyrinths on a water drop form and represent our journey through stages in life. Through Fate, I attempted to express deep emotions, fear of the unknown and surrender to an environment full of forces beyond our control. Now, during these uncertain times, Fate resonates with me. It reminds me how quickly our world can change in ways we can’t imagine. On the contrary, pieces like Verdant and Becalmed, which were inspired by the striking blue sky and breath-taking clouds that I saw after a rainstorm, hearken to the world that could be if we just softened our impact on it.

To learn more or inquire about artwork, please visit http://berkeleypotters.com/artist/mari-emori

I was elated to be accepted into this show. I’m an emerging artist, and I have been working for the past 3 years to improve my technical skills, applying to juried shows all along… Being invited to share not only the work I submitted, but also to include new work created just for this show was a validation of my efforts, and of the direction my artwork is currently taking. I was especially excited to share this new work because I had taken the risk of submitting work in progress to the juried call for artists. That piece, Shaman, is now finished, and is shown here.

My intention before the lockdown was to create several more new pieces for the show,  continuing the Shaman series, utilizing and exploring the interaction of these (new to me as subjects) humans and their animal totems. However, the Shelter in Place, the cancellation of shows, and the closure of schools caused me to lose momentum. Looking forward now, I’m regaining some rhythm in my days, working in my studio as much as I can, in spite of the circumstances. I’m excited to see the direction the work takes, and I love how it develops, often seemingly on its own. I’m focusing on Gratitude, and finding inspiration along the way.

To learn more or inquire about artwork, please visit naomisteincooper.com

Claws, pincers, teeth, horns, thorns: they gather and grasp, sense and perceive and communicate, protect and defend.  Their fragile points emerge from strong bases that join them to the creature they serve.  Their forms reflect their functions perfectly.  Their forms can seem fabulously ornamental.

As I made these pieces, I felt a kind of emergence as an artist and potter, as a sometime wood-firer, and as a lover of the small world living under rocks and tree bark and in the soil.  It seems fitting that the flames that colored the surfaces of these pieces came from wood marked with the tunnels of larval insects chewing their way out.

Now, with the Covid-19 pandemic, a different emergence has become an emergency.  Some of us are grasping for remedies and solutions, some are hoping to simply hang on.  Communities are coming together beautifully and also fracturing, debating, arguing.  Likewise, some people see persistence and tenacity when they look at my pieces; others see aggression or anger.  Still others have told me that holding one of the smaller pieces in their hand helps them feel calm.

To learn more or inquire about artwork, please visit http://www.sallygravesjackson.com/

My sculptures are vessels for caching personal stories and establishing connections with the past and the future. I cherish the intimate details and still moments punctuating my busy existence, but their clarity can be fleeting. A weeping Calla Lilly outside my studio door, a decomposing whale swept up from the sea, the slowly eroding granite needles from my home in the Black Hills–these things feel like metaphors for experiences and reminiscences dulled by the passage of time. By creating mementos and souvenirs to document my experiences, I seek to give form to my
memories, distilling them to their essence and preserving them against decay.

To learn more or inquire about artwork, please visit https://www.sarahloganceramics.com/

To learn more and to inquire about individual artist’s work, please find links to their websites in their Artist Statements.

Please click the art work image for a slide show of that artist’s work included in the exhibition. Click the artist’s name for the Artist Statement.

In jurying this ACGA show, I was both delighted and dismayed to learn that there were 22 entrants: delighted by the healthy response, and  dismayed at having to winnow them down to just a handful.

I had some difficulty in selecting from the strong group of entries. The brief was to select for a body of work to be exhibited from each of six individuals; this meant that from looking at the images each person submitted I had to consider which were cohesive enough to be just that. I therefore picked work where it appeared the potter or sculptor was exploring a particular idea or design, rather than perhaps showing their breadth of skill.

There were more sculptures than pots submitted, and in the end I chose the work of 2 functional potters and 5 sculptors. I do hope it makes for an intriguing show, and I look forward to seeing it! 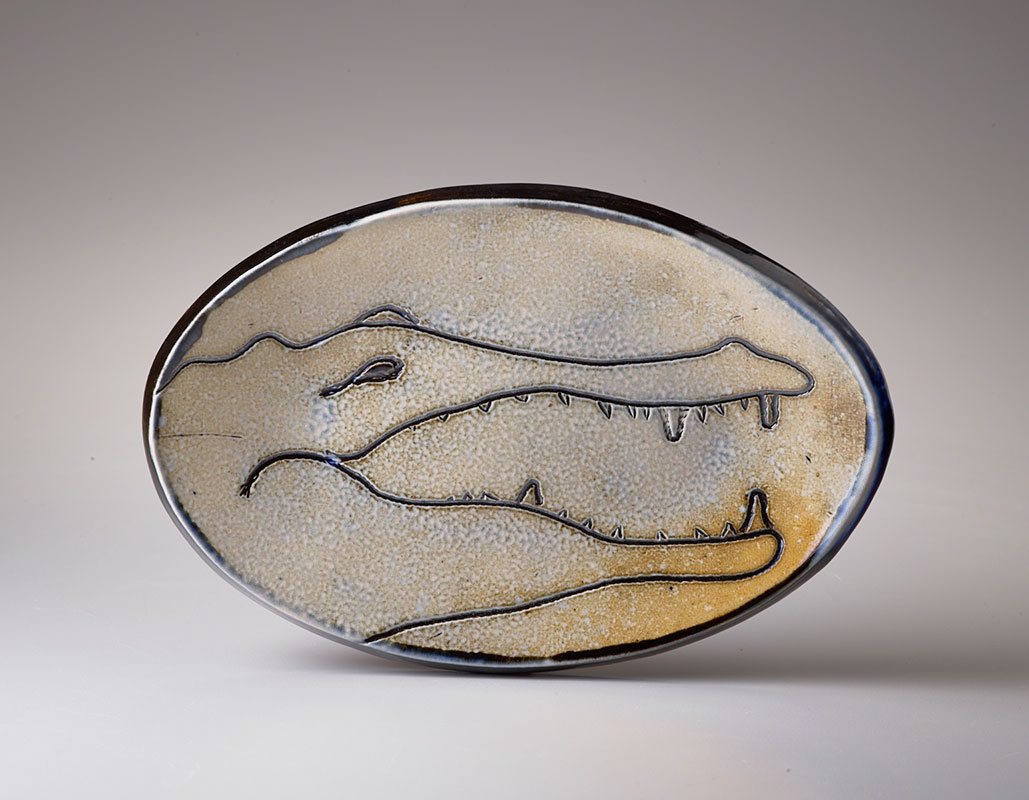 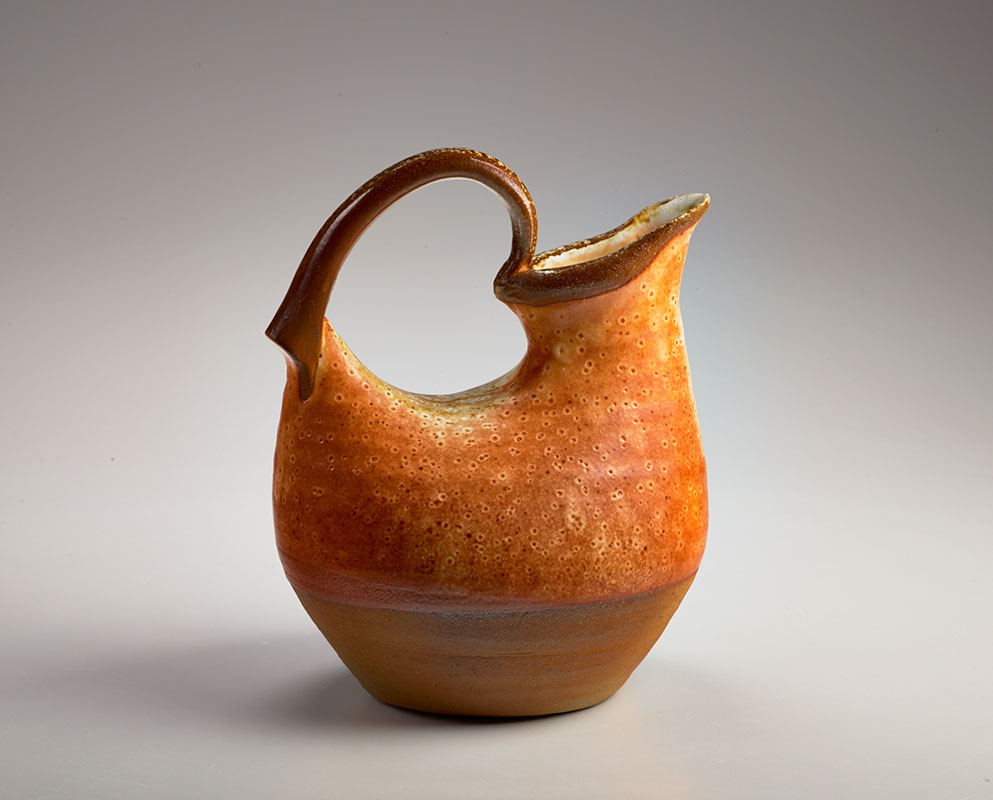 Davis Arts Center has been hosting an ACGA show during the CCACA Conference since 2006.  The first juror was Suzanne Baizerman, past curator of Craft & Decorative Arts of the Oakland Museum.  Four artists, Tom Decker, Barbara Sebastian, Tom & Sara Post and Lydija Tkalcevic were selected. There was a simultaneous ACGA survey show juried by Suzanne Baizerman at The Pence.

Robert Brady, the juror of ‘ACGA:Ceramics in Focus’  in 2016 selected Doris Fischer-Colbrie, Linda FitzGibbon, Bob Pool, Virginia Rigney, Kala Stein and Patricia Yenawine .   This was the first year we also had a ‘pop-up’ exhibition during the CCACA conference in downtown Davis at the Regency Building.

And in 2018 juror Michelle Gregor selected Bill Abright, Claudia Tarantino, Eusebio Lozano, Joseph Kowalczyk, Françoise LeClerc and Daniel Stingle.  We continued to have a pop-up down town during the CCACA conference.